Foundation 92 supported by 40 volunteers from several partners has successfully delivered over 1,700 gifts across the community in Greater Manchester this Christmas. 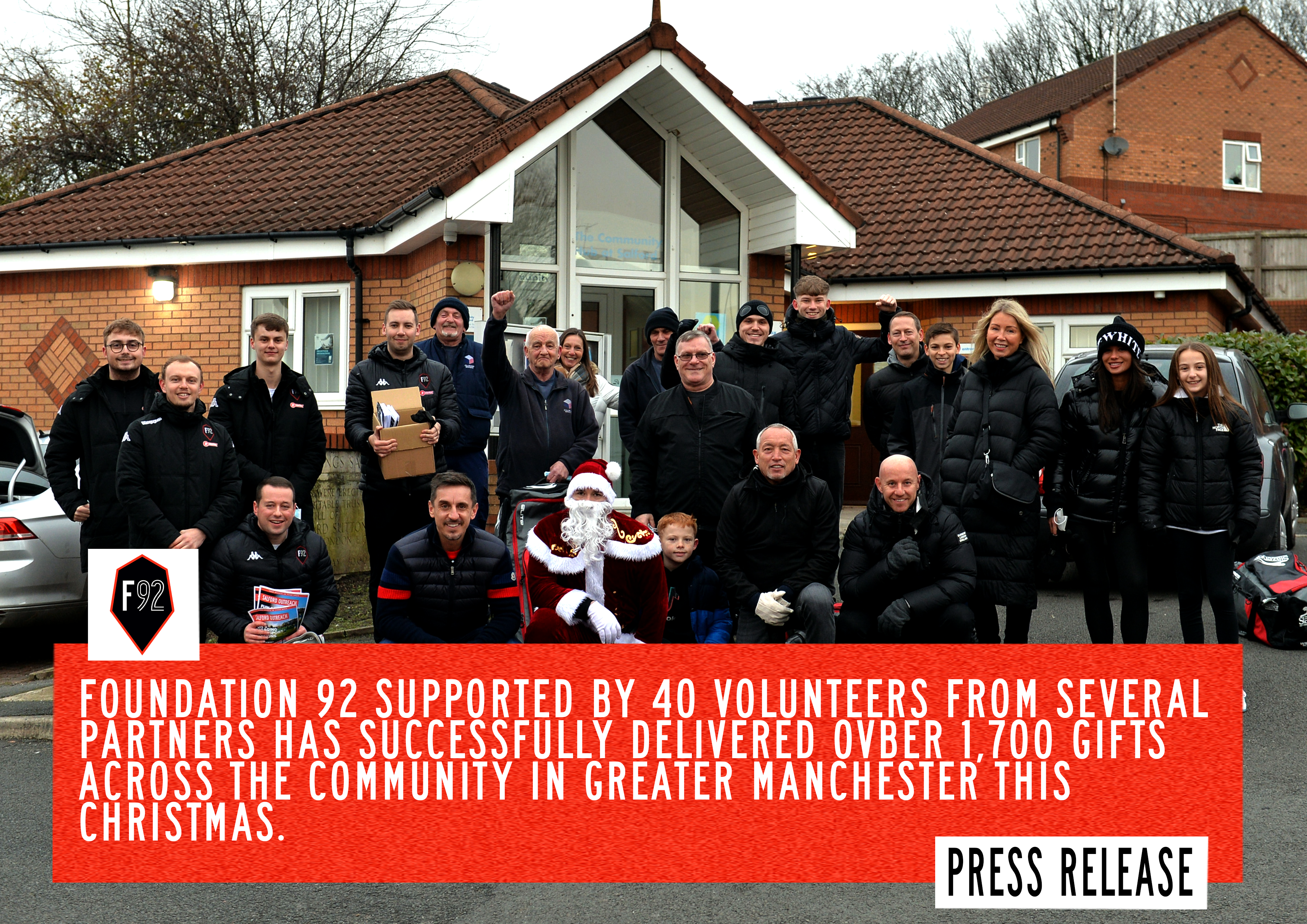 Foundation 92 and volunteers delivered 1,500 presents, over 20 hamper packs and 200 Salford City Football Club match tickets to spread some cheer this Christmas after what has been a challenging year for many throughout Greater Manchester.

Foundation 92 would like to thank TalkTalk, B & M and Singleton Stores for donating and supporting the purchase of over 1,500 presents and Christmas hamper packs enabling Foundation 92 to enhance its support for the community, making sure more people across Greater Manchester can have a happy and positive time this Christmas.

On Monday the 20th of December, Foundation 92 with the support of partners distributed presents across the Sale West area.

On Tuesday the 21st of December, Salford City FC first team players supported the campaign by distributing presents across the Langworthy estate. The Foundation 92 team with support of partners also distributed presents in Hulme.

On Wednesday the 22nd of December, Foundation 92 Founders, Gary Neville and Nicky Butt joined the Foundation 92 team and partners in the Seedley and Langworthy area of Salford to distribute presents and support the campaign.

Finally, on Thursday the 23rd of December, Foundation 92 with the support of partners will distribute presents across the Partington area.

Head of Foundation 92, Tom Hutton, said “Foundation 92 is proud to work with Clarion Futures and multiple partners across the city to provide youth work, mentoring, employability and family support programmes.

“A campaign such as this really helps Foundation 92 congratulate and support the community on its commitment and dedication to achieve its potential”.

Matt Parsonage, Head of Communities for Clarion Futures, said: “Working with organisations who share our values is hugely important to us at Clarion, and our partnership with Foundation 92 is a perfect example of that.

“We’re grateful for the support they’ve provided to Clarion residents and communities in Salford, particularly during the pandemic, and it’s great to see the Class of ‘92 spreading Christmas cheer and making memories for local people.”

Foundation 92 Co-founder, Nicky Butt, said “Foundation 92 is something that each founder is incredibly proud of. The fact that the charity is able to reach out to so many individuals both in Salford, and in Greater Manchester, enables the charity to really make a positive difference in often challenging times.

“I was so pleased to see so many people smiling faces yesterday, and to meet so many Salford residents, spreading Christmas cheer after a tough 12 months.

“Speaking to people it was obvious the difference that the charity is making, and I look forward to following the developments of Foundation 92 over the next 12 months”.

Prev
Foundation 92 and Reech Sports Limited form partnership to launch new disability, sports, and inclusion programme.
Next
Back to where it began